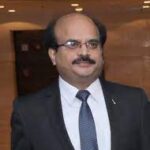 Prof. Devesh K Sinha is at present, Director, Delhi School of Climate Change and Sustainability Institution of Eminence) and Professor of Oceanography and Marine Geology in the Department of Geology, Centre of Advanced Study at Delhi University. He was also Head of the Department and Dean, Faculty of Science. He held one of the top administrative positions in the University of Delhi and worked as Dean of Colleges from 2016-2018. Prof. Sinha obtained his Graduate and Post-Graduate degrees in Geology from Banaras Hindu University with a specialization in Micropaleontology and Paleoceanography. He obtained his Doctoral degree from the same University on “Late Neogene Paleoceanography of the Southwest Pacific Ocean” based on Deep-Sea Cores recovered from International Ocean Drilling Programme – on Lord Howe Rise between Australia and New Zealand. Prof. Sinha later did his Post-Doctoral Studies from GEOMAR Research Centre for Marine Geosciences, University of Kiel, Germany on North Atlantic Thermohaline Circulation and “Heinrich Layers” based on RV-Sone-Cores from Portuguese margin. He also studied the recession of Alpine Glaciers, Switzerland due to climate change. After serving his alma mater for nearly two decades he joined the University of Delhi where he continues to be a Professor, teaching Oceanography and Micropaleontology, Paleoclimate and Stratigraphy. His research interest includes

He has significantly contributed to all the above aspects by publishing papers at national and international levels. Due to his contributions in paleoceanography, he has been invited by several organizations for sharing his expertise including the National Science Foundation, USA where he was instrumental in framing the initial phase of the Integrated Ocean Drilling Programme (IODP) in Bengal Fan at – University of Colorado, USA. His research work has found very significant citations in international literature including his more than 10 refinements in Cenozoic Time Scale which have been incorporated in Geological Time Scale-2020 published by Elsevier recently.

Prof. Sinha has been a member of several important academic committees including those of CSIR and ISRO and UGC and DST (SERB). He was also at present Vice-President of the Paleontological Society of India. He was UGC Expert and Advisory Member of the Centres of Advanced Studies in Geology of Kumaun University, Nainital , Utkal University, Bhubaneswar, and Banaras Hindu University. Prof. Sinha has been a member of Governing Bodies of prestigious Institutions of Delhi University including Miranda College, Patel Chest Institute, BRA Centre for Biomedical Research, CPDHE, and Ex-Chairman of the Governing Body of Bhaskaracharya College of Applied Sciences. He was also Ex-Chairman of the Departmental Promotional Committee of Delhi University, Executive Council and Academic council Member of Delhi University. Prof. Sinha was also honored with membership of Majlis-i-Talimi (مجلس اے تعلیمی) (Academic Council) of Jamia Millia University, Delhi. He is recipient of prestigious Paleontologist Gold Medal from PSI.

Prof. Sinha has also been a Participating Shipboard Scientist in International Oceanographic Expeditions conducted under JOINT GLOBAL OCEAN FLUX STUDIES (JGOFS) in Indian Ocean. Having a wide experience of sailing in Tropical Pacific, Atlantic and Indian Oceans to the freezing Baltic and North Sea, he has also Edited a book “Micropaleontology: Application in Stratigraphy and Paleoceanography” published from Alpha Science International Oxford, and Narosa Publishers, New Delhi. At present he has several International Research Projects on Global Cenozoic Ocean Circulation including

Prof. Sinha is in Expert Panel of reviewers in CSIR, ISRO, DST ,MOES and UGC. He is a reviewer of papers published by Elsevier and other national and International Journals. Besides academics, he loves music and is a vivid player of flute and mouthorgan. His family includes his wife, Son and all his research scholars.