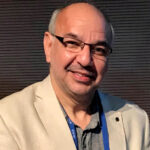 FOUNDING CEO OF THE IOE

Professor Maharaj K. Pandit is a renowned scholar of Himalayan ecology, the environment and sustainability. His work on the impact of dams on biodiversity and human communities was described as “unparalleled elsewhere in the world” by one of the reviewers (Science, 2013; Conservation Biology, 2012). The primary quest of Prof. Pandit’s research is also to understand the genetic and genomic causes of plant rarity and invasion (Jour. Ecol. (2011) (see Nature, 2011); New Phytologist, 2014), and impact of land use and climate change on human livelihoods, ecology, biodiversity, rivers and water resource sustainability (Nature, 2013; BioScience, 2014).

Prof. Pandit has had profound influence on invasion ecology with respect to his work on plant genome size and polyploidy. His pioneering work, encompassing global analysis of ploidy, genome size, chromosome number, published in Evolutionary Ecology Research (2006), Journal of Ecology (2011) and New Phytologist (2014) have proven to be ground-breaking and have deeply influenced this field of research. These papers initiated novel line of investigations globally by way of providing genetic/genomic basis for spread of plant invaders. Prof. Pandit’s work has inspired ecologists around the globe to study genomic and genetic traits as important correlates of rarity and invasion. In one of its commentaries his work, Nature (2011) wrote, “This study adds an important brick to the construction of those efforts” (Gilbert, Nature, 2011). Prof. Pandit over the years has established a reputation for focussing on important ecological-evolutionary problems which have somehow remained unaddressed.

While at Radcliffe Institute of Advanced Study, Harvard University, Prof. Pandit authored a book – Life in the Himalaya: An Ecosystem at Risk published by the Harvard University Press. He also successfully competed for the Radcliffe Exploratory Seminar Award by Harvard University for a seminar project titled, “Intertwined Component Complexity and Interconnectedness between Geological and Biological Processes”.  Prof. Pandit also heads the Himalaya Lab at University of Delhi which he founded. His book – Life in the Himalaya: An Ecosystem at Risk (2017, Harvard University Press) illustrates his acumen for interdisciplinary and cross-disciplinary approach to research blending his knowledge of earth sciences and life sciences beautifully. A review of this book sums it nicely, “Scientists who venture beyond the confines of their narrow disciplinary silos, should be commended for their boldness: [it] not only helps the younger generation of scholars get a feel for the scope of the challenges they will face across a spectrum of disciplines …, it also forces other disciplinary scientists to come up with their countervailing narratives if they feel otherwise. This is how science should advance” (Gyawali, 2018).

Prof. Pandit has a deep and abiding interest in Science Policy related to nature conservation and sustainability and has published his contributions in the topmost scientific journals (Nature, 2020; Science, 2020) addressing global audience.

A consummate scholar, Prof. Pandit is a rare combination of principle and practice of life science at interfaces. Many of his papers in highly influential journals such as Science and Nature cover topics from climate change, species’ range shifts, land use conversion, and biological invasions, fisheries, and conservation as part of toolkit in diplomacy and international cooperation. Prof. Pandit’s approach to science and to the complexities of ecology and the environment have contributed to his success and influence.

Prof. Pandit ably led the team to author the IoE proposal for the MHRD and presented to the Expert Empowered Committee. His concern was to focus on the broad idea-centric themes as opposed to disciplinary silos, which are inadequate to address the contemporary challenges of the world. The on-going epidemic is an apt example of inter-component complexity and interconnectedness between medicine, sociology, economy, information technology and so on. A popular teacher Prof. Pandit continues to be a global leader in research while also serving as a Dean and Chief Executive Officer at the University of Delhi.

Prof. Pandit employs his knowledge of earth sciences and blends it beautifully with life sciences. His book – Life in the Himalaya: An Ecosystem at Risk (2017; Harvard University Press) is quite illustrative of his interdisciplinary and cross-disciplinary thinking and research. A quote from one of the many reviews of his book sums it beautifully, “Scientists who venture beyond the confines of their narrow disciplinary silos, should be commended for their boldness: doing so not only helps the younger generation of scholars get a feel for the scope of the challenges they will face across a spectrum of disciplines related to Himalayan studies, it also forces other disciplinary scientists to come up with their countervailing narratives if they feel otherwise. This is how the science of the Himalaya should advance” (Gyawali, 2018, Population & Development Review, 44:179-181). Gyawali further writes, “As one reads the book, (s)he feels learning quite a bit while reading about the region’s natural phase; it is when reading about the mechanical phase that …one feel(s) the need to switch gears from being a student to a debate protagonist. The switch occurs in the stand-alone Chapter 6 ….. Here Pandit explores the dark and sad conflict between conservation and development…It is precisely in provoking such additional questions to further the debate on sustainability that this book will have immense value for younger and future scholars of the Himalaya”.

Over the past nearly three decades, Prof. Pandit and his team are engaged in research on ecology, the environment and conservation of the Himalayan biodiversity and ecosystems. The broad area of Pandit’s research pertains to understanding various drivers of species’ extinction, rarity and invasiveness. He studies ecological transformation of the mountain landscapes including river regulation by dams and the ensuing changes in the terrestrial and aquatic ecosystems. Pandit’s research on the Himalayan land use changes have attracted global attention [http://www.nature.com/news/flood-of-protest-hits-indian-dams-1.11932].